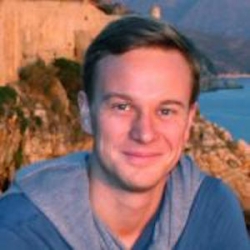 Conrad Haessler graduated from SF State in 2006 with a M.A. in International Relations. After returning to Germany, Conrad was accepted to the German Foreign Service Academy in Berlin for training. On his first posting, he was sent to China as Officer for Cultural Affairs at the German Embassy, Beijing. After three years abroad, Conrad returned to Berlin working on European Security and Defence at the German Foreign Ministry before being transferred to a position on Chancellor Angela Merkel’s Foreign Policy Team. He is now a Junior Officer on European Security and Defence matters as well as bilateral relations to Western- and Southern European countries in the Foreign Policy Division at the Federal Chancellery, Berlin.

"The perhaps most important skills I learned at SF State was to process large amounts of information in a very short time and to improve my writing."

Conrad came to SF State on a Fulbright Scholarship and has many positive memories from his time at SF State and in San Francisco. He especially appreciated being able to participate in two International Studies Association (ISA) conferences in Honolulu and San Diego. Conrad presented a research paper at ISA in San Diego.

“Presenting at ISA was a great experience and it certainly looked good on my resume. Being a Teaching Assistant was also really helpful for my teaching and presenting skills. I was fortunate to make many friends at SFSU – we had a diverse cohort with many foreign students as well as Americans. As a foreigner, I valued getting to know Americans and American culture, which I did at San Francisco State.”

How has your SF State education helped you in the German Foreign Service?

“I remember two classes, which were particularly useful in diplomat school. Professor Tsygankov’s class on Russian foreign policy helped me pass the final examination at the German Foreign Service Academy. At a later point the knowledge I retained from Professor Hanami’s classes on Japan and East Asia enabled me to qualify for my first posting with the Foreign Service, in Beijing. The perhaps most important skills I learned at SFSU was to process large amounts of information in a very short time and to improve my writing skills. Professor Miller had an especially demanding schedule, which I came to appreciate afterwards. I also vividly remember Professor Clavier’s seminar on international law, which introduced me to plenty of new perspectives on international politics.”

What were the highlights of your experience at SF State?

“At the beginning of the semester, Professor Clavier, who was the Graduate Advisor at that time, was kind to invite the whole class to her house. That really helped to break the ice between us students and also for getting to know the faculty better. Besides the academic experiences at the ISA conferences and in the classroom, we had a great cohort. I am still keeping in touch with many people from my old class. We arranged to have study evenings every other weekend at someone’s house on a rotating schedule to discuss current topics in International Relations. We called them “student salons”. Those evenings are just one memorable element among many others of my stay in San Francisco. Overall, I am very grateful for the time at San Francisco State – I learned a great deal, for the career that I am now pursuing but equally and more importantly, for life.”