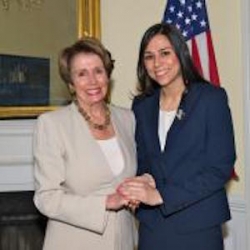 Ashley Fumiko Dominguez is the Special Projects & Events Supervisor for Congressman Ted W. Lieu, who serves California’s 33rd Congressional District. Ashley supervises all special projects and events in the district, including the Congressional Art Competition, Service Academy Nominations, and Internships. She is responsible for events from conception through execution. Additionally she conducts outreach for the areas of Beverly Hills, Santa Monica, and Marina Del Rey. Ashley is also responsible for outreach in Immigration, Intelligence, National Security, Law Enforcement, Education, Women’s Issues, the Japanese American Community, and Art. Ashley acts as the resident expert for immigration issues, which extends into immigration casework.

Prior to serving for Congressman Lieu, Ashley was the District Scheduler and Executive Assistant to Leader Nancy Pelosi. In her role as District Scheduler and Executive Assistant, Ashley was responsible for all scheduling for the Leader in the district, and for staffing the Leader West of Colorado. Ashley also worked as a Staff Assistant in Leader Pelosi’s Legislative office in Washington D.C., and as her Personal Correspondent in her Leadership office in Washington D.C. Ashley also worked for Senator Dianne Feinstein in her San Francisco office as a Caseworker. In that role, Ashley was responsible for Health and Human Service casework for the entire state of California, including SSA, HUD, CMS, OPM, EEOC, and GSA.

Why did you choose to study International Relations at SF State?

"The department’s faculty genuinely cares about their students. Many professors have an open door policy and are happy to assist students outside of office hours."

“Since I grew up in Northern California I was already familiar with San Francisco. The City is wonderful - I consider it my second home. I initially choose a double major in Japanese and Biochemistry at SF State, but after completing my first semester, I was looking to change majors. After taking Introduction to International Relations with Professor Simpson, I decided to switch to IR. I just loved the class and the subject, and was instantly hooked. It was almost serendipitous – I was so happy to find IR in San Francisco! Looking back, I think the calibre of the B.A. program is unparalleled. Especially the capstone class, IR 550 in which students write a 60-page thesis, which gave me an advantage in the M.A. program over students from other schools who had not written such extensive papers during their undergraduate programs.”

Why did you choose to stay for your Master’s at the International Relations Department?

“The department offers so many classes and there were many professors I hadn’t been able to take during my undergraduate studies that I felt like I still would be able to learn a great deal. The IR curriculum is extensive and from taking a master’s level course with Professor Sanjoy Banerjee, I knew that the program would offer plenty of challenges and new learning opportunities. I was also out to build my professional network and wanted to be able to concentrate fully on my studies. The department’s faculty genuinely cares about their students. Many professors have an open door policy and are happy to assist students outside of office hours.”

What were the highlights of your SF State experience?

“After the devastating earthquake hit Haiti in 2010, I decided to volunteer and help out with the relief effort. It was a life-changing experience in many ways, and it gave me a newfound respect for government relief agencies. I have always been committed to government service, and the experience from Haiti opened my eyes to other parts of government service than the U.S. Department of State.”

How has studying International Relations at SF State helped you in your career?

“Besides the IR-specific knowledge, I would say that I am able to see relations between people and other actors and understand their interactions much clearer than professionals from other educational backgrounds. Since the IR programs were demanding, I developed my work ethics significantly. The national and cultural diversity of my class also taught me how to interact and work with people from various backgrounds – the intercultural competence I need and use every day in my current position.”

How would you rank the knowledge and skills you acquired from SF State relative to the Ivy League institutions?

"The IR programs at SF State will provide students with skills and knowledge at least on par with what they would get from top national institutions."

“Some people in D.C. are surprised when they find out that I have a degree from a public school as opposed to an Ivy, especially when working on the Hill, but there is no reason to doubt that the IR programs at SF State will provide students with skills and knowledge at least on par with what they would get from top national institutions. I have no doubt that the IR programs at SF State gives students all the skills necessary to be competative candidates in the workplace.”