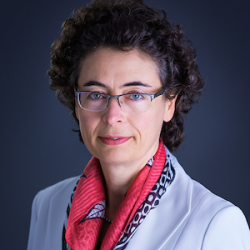 Lucia Volk obtained her Ph.D. in Middle Eastern Studies with a concentration in Anthropology from Harvard University (2001). She also holds an M.A. in Arab Studies from Georgetown University's School of Foreign Service (1994) and a B.A. in International Relations from Stanford (1991). Her Ph.D. dissertation titled "Missing the Nation: Lebanon's Post-Civil War Generation in the Midst of Reconstruction" studied the process of social and cultural reconstruction after Lebanon's 16-year-long civil war from the point of view of Lebanese returnee migrants.

Past research in Lebanon focused on the politics of memory -- and especially the symbol of the martyr -- after times of war or political crisis. Various political elites across ethno-religious communities deployed "the martyr" via public memorials in order to legitimize their claims to power.  Volk's book, "Memorials and Martyrs in Modern Lebanon," appeared in 2010 with Indiana University Press. She also published on the topic of politics of memory in the International Journal of Middle East Studies, the Arab Studies Journal, the Bulletin d'Archéologie et d'Architecture Libanaises (BAAL) and Middle Eastern Studies. She is author and editor of "The Middle East in the World: An Introduction" (Routledge, 2015).

Locally, Prof. Volk conducted research among recent Yemeni immigrants who live in San Francisco's Tenderloin neighborhood.  She conducted focus groups with Yemeni women to investigate issues of health and well-being. Some of her research findings are published in Medical Anthropology Quarterly. Moreover, she co-authored a report based on data from a health survey conducted by the Arab Cultural and Community Center in San Francisco, titled "Living Healthier Lives in the Diaspora."  Currently, she investigates refugee flows from the Middle East to northern Europe, and the various legal categories that define refugees' lives.